Structure of the Cervical Spine

The cervical spine has many structures that can be the source of neck pain, including inter-vertebral discs which may bulge or herniate, ligaments that may become calcified, muscles, nerves, and the facet joints. The diagnosis of osteoarthritis in the cervical facet joints may be one of exclusion, when all other possible aeitologies of pathology have been ruled out. Sometimes the disease is overlooked during investigations of pain and disease, despite being a significant long-term ramification of injuries such as whiplash. 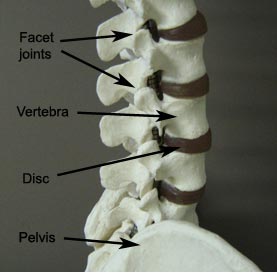 The facet joints in the cervical spine are synovial joints contained within a fibrous capsule. There are superior and inferior facets forming joints in the spine to allow variable degrees of flexibility. The fibrous capsules contain free nerve endings and are innervated by mechanoreceptors. There are more mechanoreceptors in the cervical spine compared to the lumbar spine which may be of significance when noting the sensations of pain and muscle control involved in the health and pathology of this area.

Symptoms of facet joint disease may include tenderness of the area over the facet joints or paraspinal muscles, and nerve abnormalities, with inflammation of the facet joints in the cervical spine. Diagnosis through scans is usually not helpful as often patients have cervical spinal stenosis, spondylosis, and other degenerative spinal issues both with and without neck pain. Treatments often involve selective nerve root block of the facet joints, anti-inflammatory medication, physical therapy, and, on some occasions, surgery. Beneficial treatment relies on an accurate diagnosis, which in many cases is, unfortunately, not obtained.